Whatever about the current excitement over Corbynmania in Britain, there’s no doubt that the hottest political trend over the last few years has been the resurgence of the far right in Europe and beyond.

Whether the National Front in France, Golden Dawn in Greece, the Party for Freedom in the Netherlands it seems that being a quasi-fascist is firmly back in vogue.

Quite clearly, this political phenomenon has permeated popular culture. Now I can’t pretend to be up with fashion trends, but if I nip out for a loaf of bread or a pint of milk I’m sometimes so shocked at the haircuts and styles emerging from the barbers or clothes shop that I want to run away and join the nearest resistance cell. 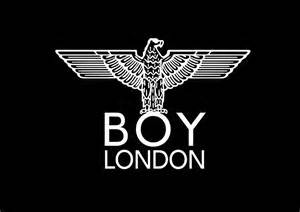 The musician Bryan Ferry once remarked that the Nazis had ‘great style’ and a solitary glance at a pack of stylish young men these days will confirm that fact. Many wouldn’t look out of place in the Third Reich. Take hip London brand ‘Boy’, still favoured by numerous A-listers despite its logo’s unmistakeable similarities to the Nazi Reichsadler.

Then there’s the ascent of the aggressive crew-cut or slicked-back undercut. Although not the exclusive preserve of the right wing, this style is sometimes dubbed the ‘SS cut’ and sported by many a trendy young fella.

But why should this apparent popular homage to national socialism be restricted to the boys? Why should they have all the fun?

When it comes to the girls of today, by contrast, it’s pretty evident that emulating the staid mantra of Kinder, Küche, Kirche associated with Nazism is not cool. At least in the fashion stakes. The wholesome dumpy German housewife look might be indulged in by pretty young things at events like Oktoberfest but outside Bavarian-themed pubs you don’t see it very often as a style choice for the fashion-conscious young woman.

But don’t let this apparent gender disparity fool you!

We all know that dieting is more popular among women than men. And it’s in the arena of the latest cool diets – assisting you in looking your slender youthful best – that the girls give the boys a run for their money in paying seeming homage to the Nazis.

Let me explain … I refer, of course, to the most ‘with it’ dietary fads of today and their unacknowledged debt to – who else? – Adolf Hitler.

Now, one of the most influential role models for diet-conscious young gals today is ‘Deliciously Ella’ – Ella Woodward – who offers recipes sans wheat, meat and sugar. Heard of her? Like Nigella Lawson, she’s the daughter of a fairly right-leaning politician but just check out her website (http://deliciouslyella.com/) and it’s all peace, love and avocadoes and not a hint of Hitler and his dietary dreams. 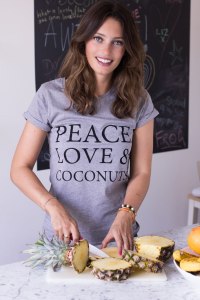 Then there’s Hemsley and Hemsley (http://www.hemsleyandhemsley.com/) Now they are a couple of slender sisters who basically just eat vegetables. Occasionally, ever so occasionally, meat creeps in. But they’re singing from the same hymn sheet as our Ella.

‘Yeah, OK. I know Hitler was a vegetarian, but what has all this got to do with the Führer?’ I hear you cry. Well, read on …

All these trendy girls are topped by Fully Raw – http://www.fullyraw.com – the creation of Kristina Carrillo-Bucanam, who rid herself of Hyperglycemia at the age of 18 eating nothing but a low fat raw vegan diet consisting solely of fresh fruits and vegetables, and the pinnacle of raw food cool. Of course, Kristina’s recipe ideas are confined to the realm of gazpachos, smoothies and salads. Cooking, she claims, destroys nutrients, “denatures the proteins, carcinogizes the fats, and caramelizes the carbohydrates”.

You could counter that cooking releases certain nutrients as well as killing bacteria and, well, simply makes many foods taste better. Not to mention the climactic differences between Kristina’s Texas and Northern Europe; salads are simply less appetising without the sunshine. But to do so would spoil the fun and destroy the admittedly tenuous premise of this blog post.

So, where’s the link with Nazi cool? Well, Hitler was advocating all this stuff decades ago, darling. 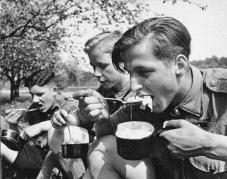 He wasn’t a mere veggie, our Adolf, oh no! His dietary opinions went far beyond the volkish eintopfsuppe, the Germanic disdain for the western dietary impurity, and the longing to return to rye bread and autarchy. No, I tell you Hitler was the unacknowledged father of the hip diet of today.

“It’s not impossible that one of the causes of cancer lies in the harmfulness of cooked foods.”

“the doctors used to say that a meat diet was indispensable for the formation of bones. This was not true … we have bad teeth … this has something to do with a diet that’s rich in yeast. Nine tenths of our diet are made up of foods deprived of their biological qualities … mortality is enormous among [people] who eat only cooked foods.”

“When you offer a child the choice of an apple, a cake or a piece of meat it’s the apple he chooses … ancestral instinct”

So there you have it! Move aside, skeletal cool dietary gurus, Adolf beat you to it. And like the return of fascism in the fashion stakes, the extreme national socialist diet is quite obviously creeping in to trendy eating habits.

The Hitler diet: the next big foodie trend? Remember, you heard it here first.